With my collection now in storage, it makes life easier when people need to get at it for events and projects, so when the guys at Partizan got in touch about potentially ‘renting’ a few thousand tapes for a music video, I gladly obliged.

In truth, I had not heard anything from Ladyhawke since her hit “My Delirium”, which is down to pure ignorance on my behalf, but as soon as communication started from the creative people behind the video – Youth Hymns – I knew both my tapes and the song were in safe hands. 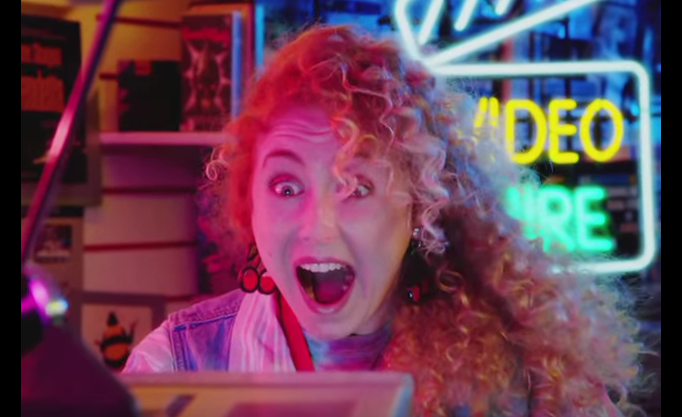 The video is now live for all to see and tapes aside, I think the track is incredible and the video compliments it so well. Genuine pop gold.

Somewhere between 1500 and 2000 tapes were sent down to Croydon for a day’s filming, and happy to report that no tapes were harmed in the making.

Video Palace – March 26th to 29th. A joint creation between DVD Bang, Scalarama and Viva VHS. Funded by the BFI.

After taking part in Flatpack Festival last year with a double-bill of Anguish and Popcorn for a movie-within-a-movie event, I was incredibly fortunate enough to be asked again for this year’s festival. Michael at Scalarama had the idea of joining forces with London-based Asian disc worshippers DVD Bang to bring the city of Birmingham its very first pop-up rental store – Video Palace.

END_OF_DOCUMENT_TOKEN_TO_BE_REPLACED

I won’t go into too much detail, but here is a little ‘promo’ clip from one of the extras that will be included on Exposure Cinema’s forthcoming Blu-ray release of StageFright (’87).
Because the film was such a hit on video rental, a small section of extras will focus on the beloved format, and I was fortunate enough to be asked to take part in doing a little interview.
*may contain strong Midlands accent

My only regret is that I didn’t conduct the whole interview wearing a giant owl mask. And I also apologise if this puts you off pre-ordering the disc. If it hasn’t, you can proceed to this link.

Also, you may have noticed that my name on the introduction is made up of letters taken from old VHS covers. I’ve attached a better example below, even adding the background back in to give you more clues. If anyone can tell me all nine movies, i’ll send you off something real special. 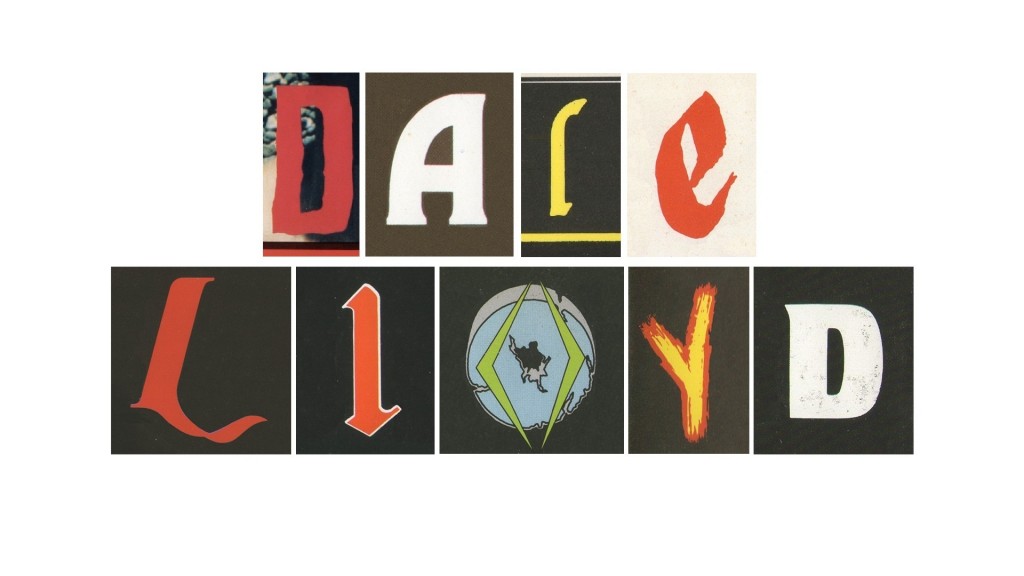 Around the age of 10 my Dad introduced me to the British sitcom The Young Ones. I’ll admit, not great parenting skills on his behalf but this was the 90s. Upon a recent revisit, a lot of the show hasn’t aged particularly well but it still has a certain charm, even after all these years. One episode that has always stuck with me is ‘Nasty’, whereby the four lead characters; Mike, Neil, Vyvyan and Rick decide to rent a real video nasty from Harry the Bastard. Late fees apply. 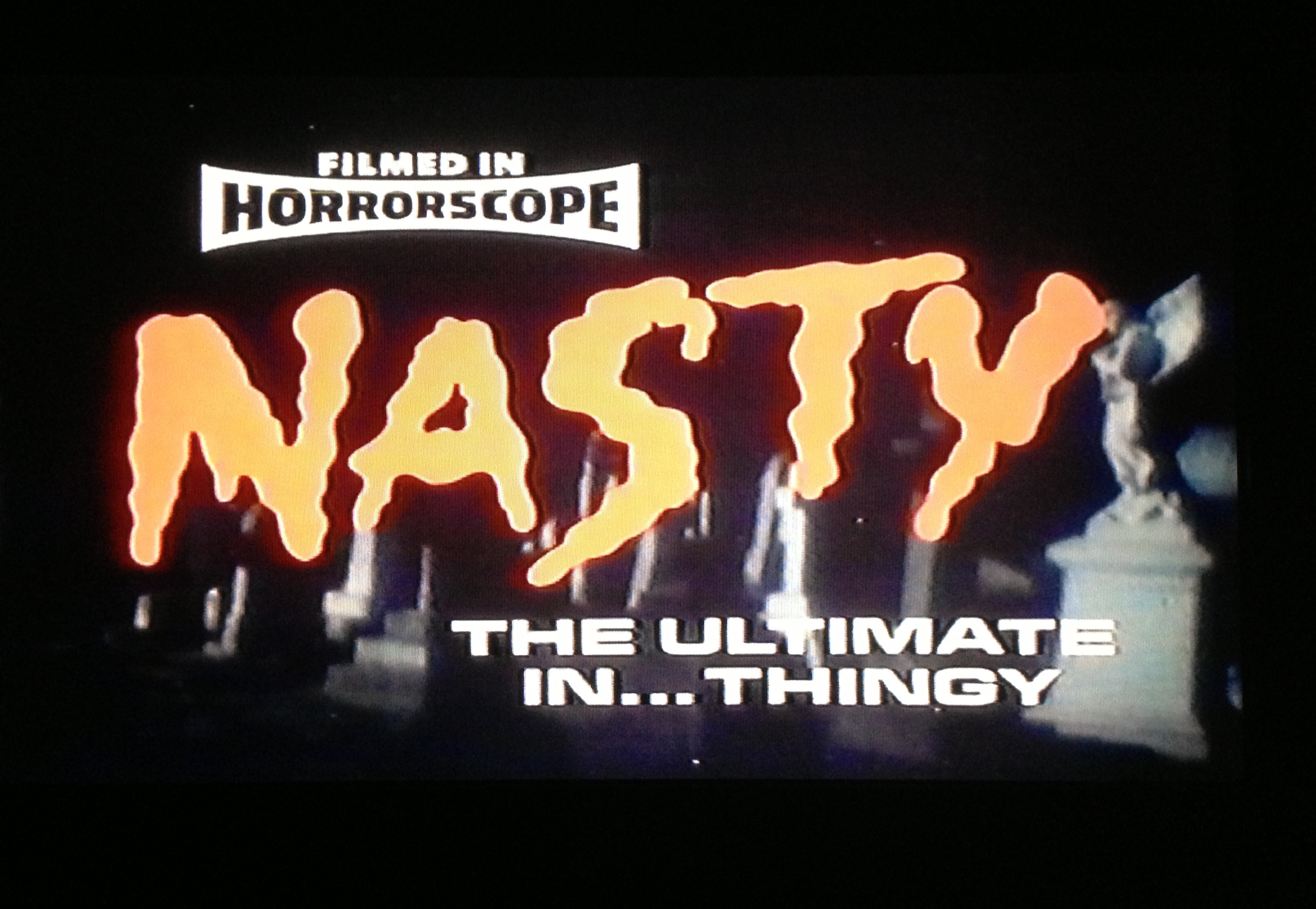 The video is called ‘Sex With the Headless Corpse of the Virgin Astronaut’. However, it’s another tape in the episode that I became mildly obsessed by, and appears only in a few shots, mainly on top of the VCR that Mike and Vyvyan are having trouble installing. It’s quite difficult to make out in terms of design but the title is clear to see – Two Million Maniacs.

END_OF_DOCUMENT_TOKEN_TO_BE_REPLACED

In December I was fortunate enough to speak to various people behind the scenes of the release of the horror anthology movie, V/H/S. I did a few interviews about my collecting habits and even got to see proofs of the artwork that was to be used for the release of the movie on VHS.

In addition to this, I was then approached by the event company behind the launch about renting out my collection, or at least half of it anyway. The launch was to take place on the 16th of January, a mere two days before the film was to be released. 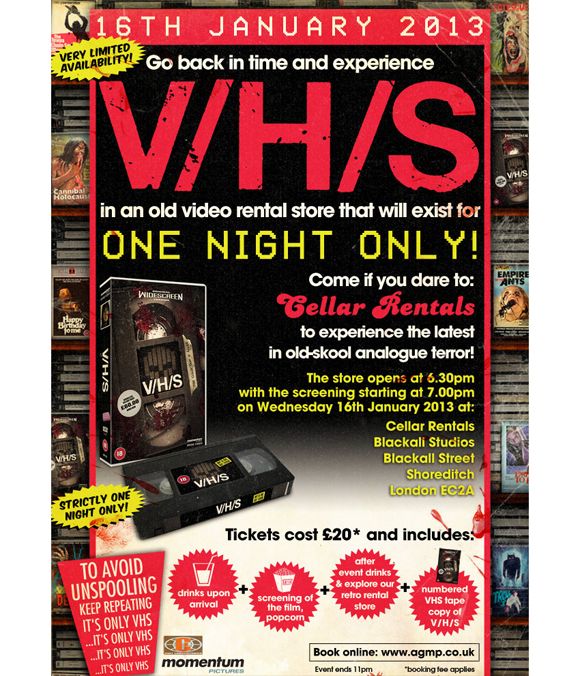